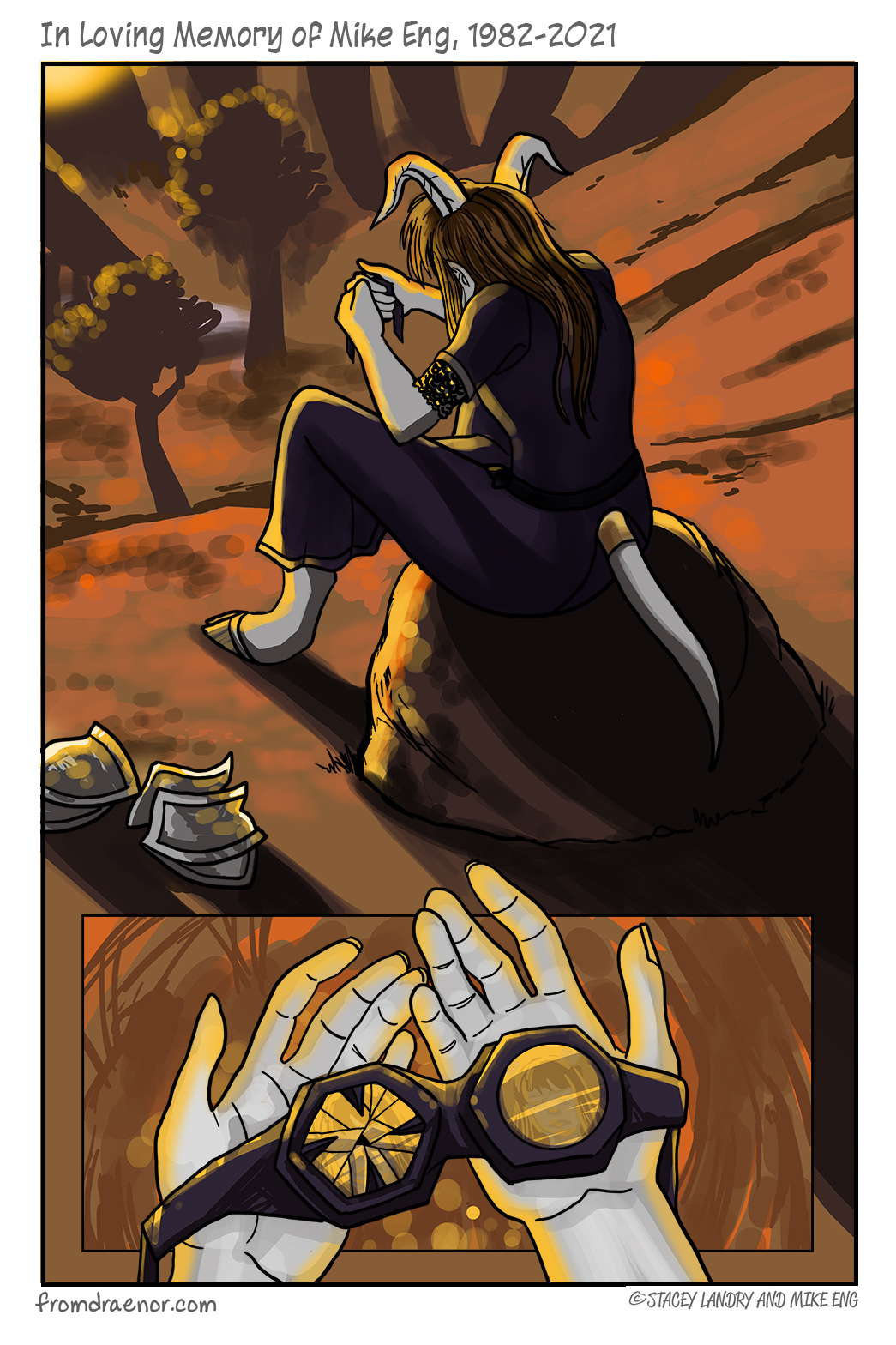 And We Walked Out Once More Beneath the Stars, II

Five years ago today, FDWL ended its run. This feels fitting in a way, because the comic also ran for five years. If things had been different, maybe Mike and I wouldn’t even have remembered this milestone. Or we would’ve and said, “Hey, isn’t that neat.” Neither of us played World of Warcraft anymore, and this project had been largely lost because the original website was hacked and after a few years of not fixing it, I finally let the domain name lapse.

But things are different now. Mike passed away suddenly last month. It’s been three weeks, and I can’t say I’m doing very much better. If you want to read my original post (including this image) it’s here on my blog. It’s more raw, and personal. I’m still struggling to make sense of how this could happen, how someone who was so vital and funny and loved could just be gone. I know it happens all the time, I just never saw it coming. I thought we had more time. I owe so many thanks to Sean, who has somehow (a wizard did it) recreated our site with this new domain name and spent many personal hours getting it working. Even if nobody else ever looks at it, I’m eternally grateful. Thank you so much. You gave this project “back” to me and anyone else who wants to look at it and remember Mike.

I’ve been reading back through Mike’s old tweets, and posts. I guess trying to feel a connection to him, and remember who he was. In one of the tweets he talks about how amazed he was that he and I made this comic together every single week for five years. I think it’s pretty amazing, too. I never thought about it becoming - quite literally - part of his legacy. We did our best to make the comic for those years. First to make people laugh, and then to make people care about a story we wanted to tell together. It was really a labour of love, and we both felt we limped across the finish line a bit. But we made it, and we finished the comic. I consider myself so privileged to have worked with him. I’m a better artist because of that time. Enough so that I look back at the comic and think, “Ugh, I could redo the art on this one page…” But I’m not going to do that. I’ll let it stand as it was, with the understanding that people change and grow.

I completed this final page of FDWL in the initial shock of grief, and I did it exactly the way we worked on every page. I just had to supply his voice in my head. You know he loved to get a reaction from people. If he was writing something sad, it had to be the SADDEST. I tried to channel that spirit for this page. I took reference photos, I did multiple sketches, each time telling myself: “Too boring, that’s not sad enough, what about from this high angle? That’s sad,” and then “Okay, she’s going to be holding his goggles. Oooh wait, one of the lenses will be BROKEN,” and then a few minutes later “…and you can see her face reflected in it. Oh man.”