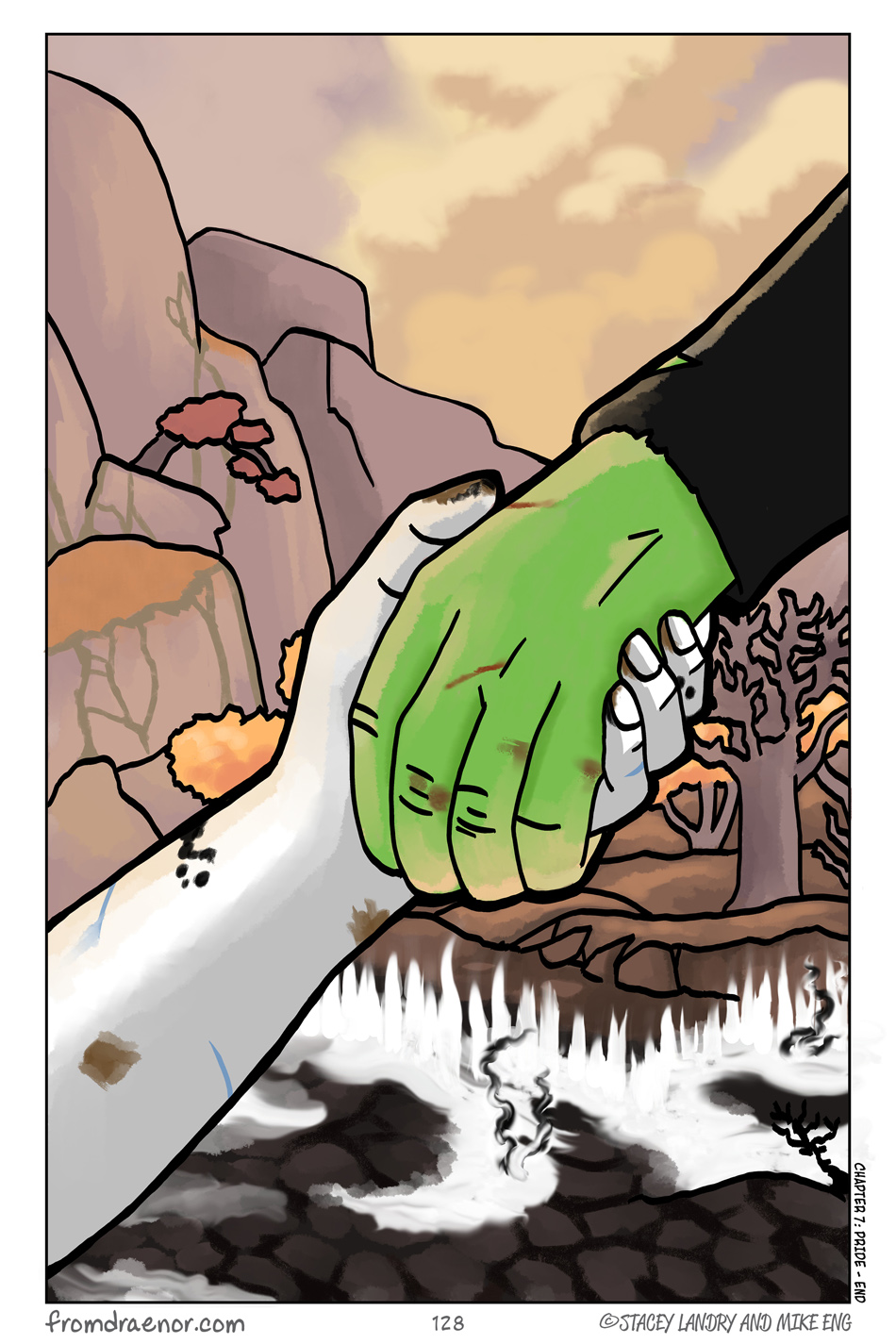 And We Walked Out Once More Beneath the Stars

Almost exactly three years ago, we published the first page of our revamped From Draenor With Love. That was so long ago. That was before Warlords of Draenor was even announced! It’s kind of surreal to even think about.

When we set out on this journey, we wanted to explore some themes that we both hold close to our hearts: friendship and family. We’ve always enjoyed showing what good friends Rades and Vidyala are, but when we began discussing the possibility of a comic, we had to figure out why they were such good friends. We quickly realized that they had a lot in common, despite the tremendously bad blood between the draenei and the orcs in lore. And one of those shared traits was how their childhoods were shattered by the rise of the Horde…and how both likely still had family and/or relatives poking around on Draenor.

But why would they go back to Draenor? Who would have a reason to send them there? Wrathion, of course. Who else? After all, he’d just spent all of Mists of Pandaria using us as pawns to accomplish his own goals. And what’s one of the biggest unexplored lore hooks with our young Black Prince? Whether he knows about Baron Sablemane way off in Blade’s Edge, who in all likelihood survived Wrathion’s little crusade to wipe out the other black dragons. And if we’re talking about complicated family relationships…

Naturally, we know Wrathion doesn’t go anywhere without his bodyguards. We were originally going to use Right, the female human bodyguard who accompanies him everywhere in-game. But we quickly realized that Right wouldn’t have any association or attachment to Draenor. But an ogre, on the other hand? Now we’re talking. And if we can’t get a female ogre in-game, then fine — we’ll just make one ourselves.

It’s been a fun three years with these characters, even if we did put them through quite the emotional wringer. Are they better for their experiences? Who can say. I’m sure things didn’t go exactly as any of them expected. And the answers they found may not have been the answers they wanted. But such is life.

We’ll have a short epilogue coming your way over the next four weeks, and then that will be the end of our story. Thank you for reading, for commenting, and for supporting us on Patreon! We can’t say it enough, but your encouragement and kind words really meant the world to us. 🙂