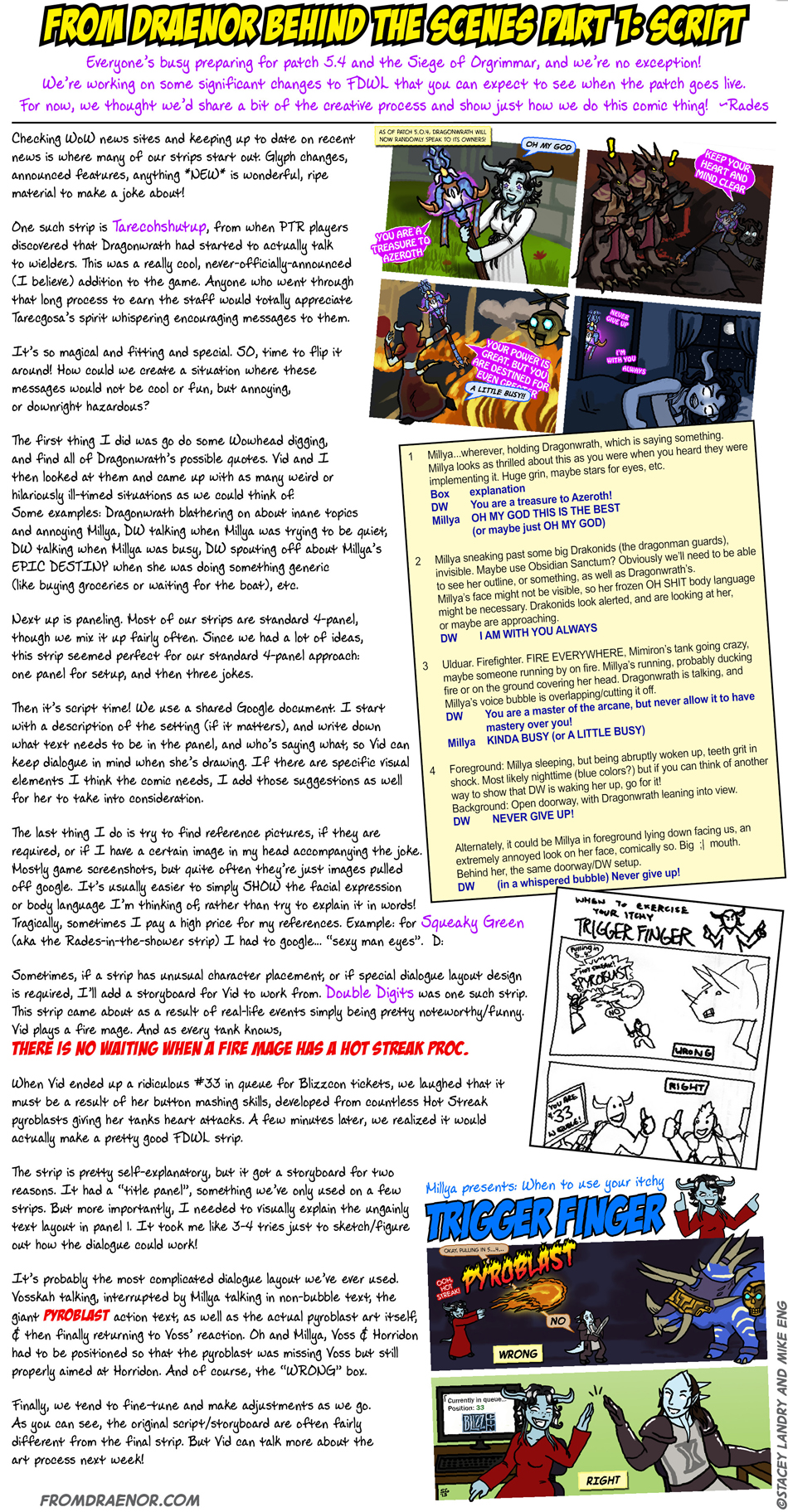 Behind the Scenes Part 1: Script

For a larger version of today’s strip, click here. For a text version, well, read on!

Everyone’s busy preparing for patch 5.4 and the Siege of Orgrimmar, and we’re no exception! We’re working on some significant changes to FDWL that you can expect to see when the patch goes live. For now, we thought we’d share a bit of the creative process and show just how we do this comic thing!

Checking WoW news sites and keeping up to date on recent news is where many of our strips start out. Glyph changes, announced features, anything NEW is wonderful, ripe material to make a joke about!

One such strip is Tarecohshutup, from when PTR players discovered that Dragonwrath had started to actually talk to wielders. This was a really cool, never-officially-announced (I believe) addition to the game. Anyone who went through that long process to earn the staff would totally appreciate Tarecgosa’s spirit whispering encouraging messages to them.

It’s so magical and fitting and special. SO, time to flip it around! How could we create a situation where these messages would not be cool or fun, but annoying, or downright hazardous?

The first thing I did was go do some Wowhead digging, and find all of Dragonwrath’s possible quotes. Vid and I then looked at them and came up with as many weird or hilariously ill-timed situations as we could think of. Some examples: Dragonwrath blathering on about inane topics and annoying Millya, DW talking when Millya was trying to be quiet, DW talking when Millya was busy, DW spouting off about Millya’s EPIC DESTINY when she was doing something generic (like buying groceries or waiting for the boat), etc.

Next up is paneling. Most of our strips are standard 4-panel, though we mix it up fairly often. Since we had a lot of ideas, this strip seemed perfect for our standard 4-panel approach: one panel for setup, and then three jokes.

Then it’s script time! We use a shared Google document. I start with a description of the setting (if it matters), and write down what text needs to be in the panel, and who’s saying what, so Vid can keep dialogue in mind when she’s drawing. If there are specific visual elements I think the comic needs, I add those suggestions as well for her to take into consideration.

The last thing I do is try to find reference pictures, if they are required, or if I have a certain image in my head accompanying the joke. Mostly game screenshots, but quite often they’re just images pulled off google. It’s usually easier to simply SHOW the facial expression or body language I’m thinking of, rather than try to explain it in words! Tragically, sometimes I pay a high price for my references. Example: for Squeaky Green (aka the Rades-in-the-shower strip) I had to google… “sexy man eyes”. D:

Sometimes, if a strip has unusual character placement, or if special dialogue layout design is required, I’ll add a storyboard for Vid to work from. Double Digits was one such strip. This strip came about as a result of real-life events simply being pretty noteworthy/funny. Vid plays a fire mage. And as every tank knows, THERE IS NO WAITING WHEN A FIRE MAGE HAS A HOT STREAK PROC.

When Vid ended up a ridiculous #33 in queue for Blizzcon tickets, we laughed that it must be a result of her button mashing skills, developed from countless Hot Streak pyroblasts giving her tanks heart attacks. A few minutes later, we realized it would actually make a pretty good FDWL strip.

The strip is pretty self-explanatory, but it got a storyboard for two reasons. It had a “title panel”, something we’ve only used on a few strips. But more importantly, I needed to visually explain the ungainly text layout in panel 1. It took me like 3-4 tries just to sketch/figure out how the dialogue could work!

It’s probably the most complicated dialogue layout we’ve ever used. Vosskah talking, interrupted by Millya talking in non-bubble text, the giant PYROBLAST action text, as well as the actual pyroblast art itself, & then finally returning to Voss’ reaction. Oh and Millya, Voss & Horridon had to be positioned so that the pyroblast was missing Voss but still properly aimed at Horridon. And of course, the “WRONG” box.

Finally, we tend to fine-tune and make adjustments as we go. As you can see, the original script/storyboard are often fairly different from the final strip. But Vid can talk more about the art process next week!