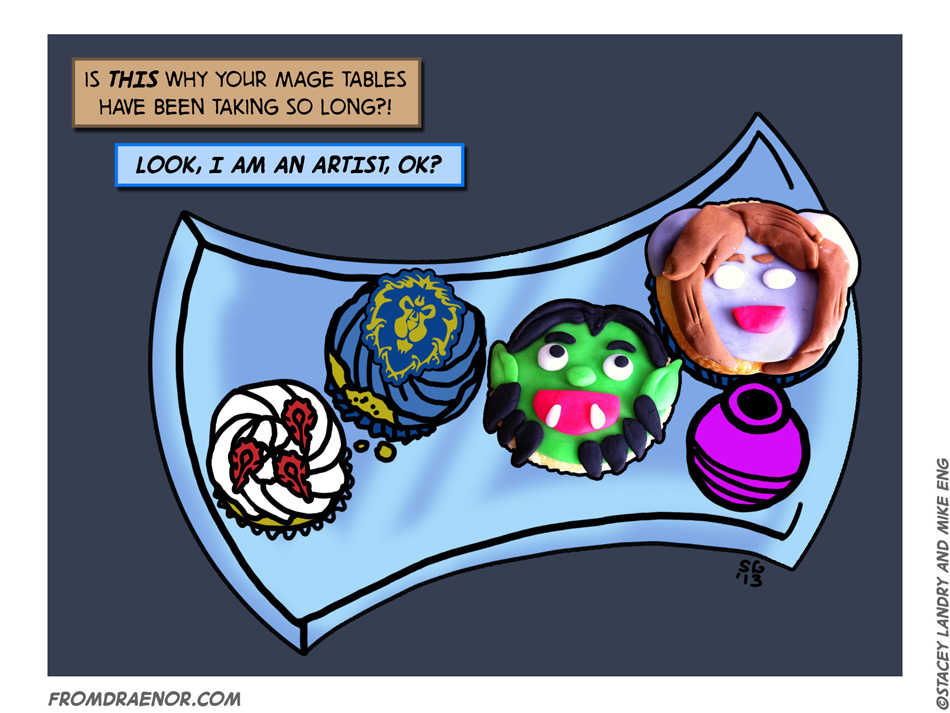 At the end of March I was thrilled to be taking a trip to Toronto/Montréal because it meant I’d have the chance to meet lots of great WoW people I’d gotten to know online. When I looked for “Things To Do in Toronto” I found a listing for a cupcake decorating class, and that was just icing on the cake. I was thrilled when Serrinne, Kaleri and Jasyla agreed to go with me. We met up that first night and had a blast at Le Dolci learning all about how to decorate cupcakes with icing and fondant. Faced with my first blank cupcake, I had the equivalent of artist’s block – what should I do with it?

The answer was clear. I would make a cupcake Rades. Everyone else at the class was mystified. “What are you making? Is it a frog?”

The owner of the bakery took a photo and said “Can I post it on Twitter?” I agreed, on the condition that she tweet at Rades while she was doing it. So out of the blue, Rades gets the following tweet:

I have it on good authority that he was pretty surprised. I then went on to sculpt a Vid-cake as well, with somewhat less success. Fondant is a bit floppy and Vid’s horns weren’t easy to do. Plus her skin tone is wrong. But it was still fun to make! Of course, making those two cupcakes took up the better part of the class and then I was scrambling at the end to just slap icing on the rest of my cupcakes, whereas my companions had made tons of beautiful treats in that time. I had a great time though, and I loved surprising Rades. Of course, I asked him if he thought we could use the cakes somehow in a comic. He urged me to get some good photos of them, but was incensed when I admitted that after I’d taken the photos I left the cupcakes in our hotel room in Toronto.

“I couldn’t bring myself to EAT them!”