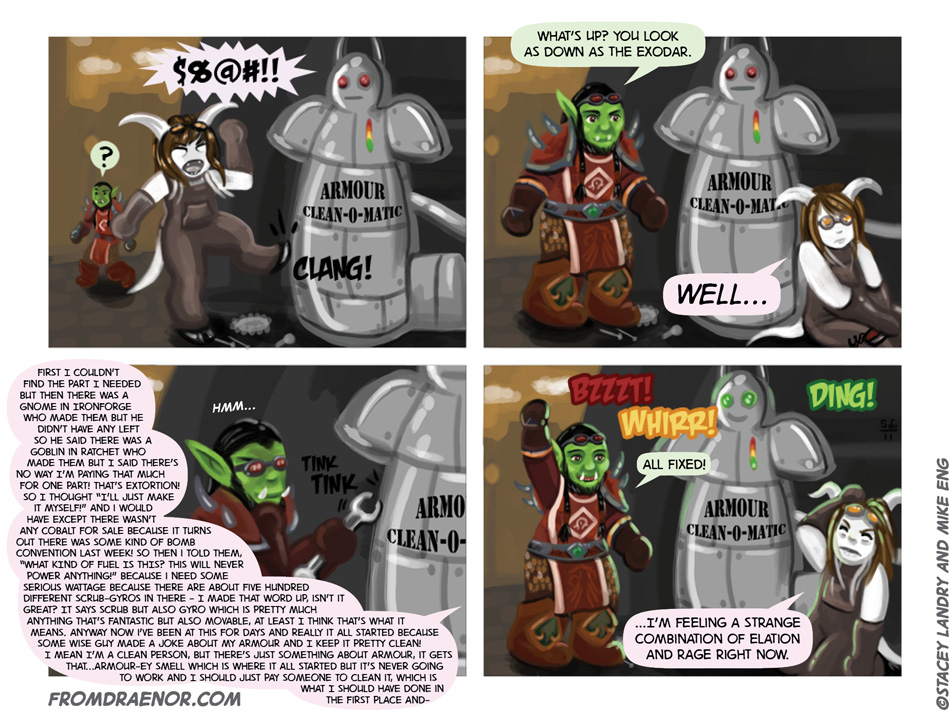 …Then I finally found a suitable mold for the chassis or I thought it was a suitable chassis mold but actually they meant it for a gyrocopter and it wasn’t quite right so I tried to convince a friend to model for it but he wouldn’t because he said, and I quote, “Your inventions have a way of proving fatal to people who agree to test them,” I ask you, is that fair? I mean there was that incident the one time – okay maybe two times – actually, you know what, never mind, it’s just not fair for people to make assumptions! There’s no logical connection between the behaviour of one invention and the next. This bears no relation to the Stealth Revealing Sparkle Powder, or the Super Hydro Powered Leviathan Mark III… This is a completely new idea, this is ground breaking!

It took me at least three days to convince the magi that I should be allowed to use their water supply, but then after all that I realized you don’t actually want to use water because hey – rust – so it uses a mixture of mammoth oil and I only used mammoths that died a natural death, because those DEHTA people are insane! The birds were dropping rocks on me which totally dented my armor, incidentally a completely separate problem, but it’d ultimately be nice if the Clean-O-Matic could also be the Un-Dent-O-Matic but it doesn’t exactly roll off the tongue, does it? Clean-O-UnDent-O-Matic? Cleandent-O-Matic? But anyway when I tried to integrate a hammering mechanism all it did was pound the ever-loving crap out of my armor and I had to take it to my smith and he was not happy because he said “That’s the third time this week!” and the thing is that some people just don’t understand progress, you know?