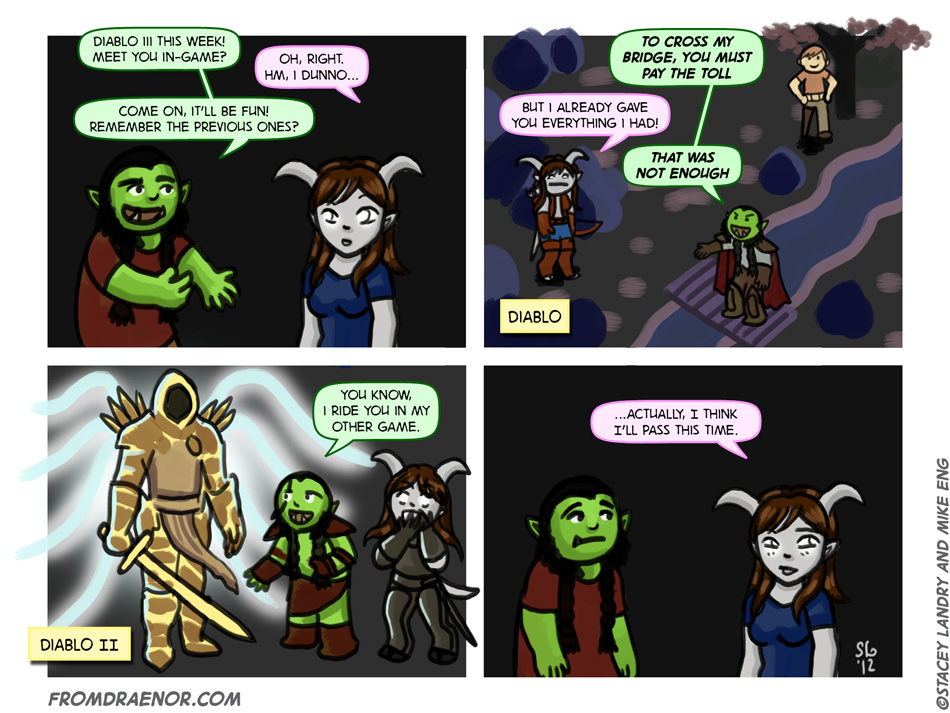 The Lord of Terror

Like everyone else on the planet, we’ve sunk some time into Diablo III so far, and it’s a blast. So far I’m greatly enjoying the Wizard (LASER FREEZE RAY) and the Demon Hunter is also a lot of fun. I’ve played around with the Monk a bit, but I don’t think I enjoy the melee playstyle. I’ll stick with my blasters.

Vid, of course, is playing a Wizard. Shocking, I know!

(SHOCKING BECAUSE yeah you get it.)

As for the older games? Despite what it might say in the strip, Vid’s never played the original two Diablo games. I, however, have. I fondly remember the old Diablo days, spamming Charged Bolt and filling entire rooms with lightning, or the unforgettable baddies like the Butcher, King Leoric and Gharbad the Weak.

I also fondly remember trapping friends on Wirt’s little island and refusing to let them pass until they paid me a toll. Yeah, panel 2? That’s an 100% verbatim conversation, from many years ago.

You see, Wirt the Peg-Legged Boy was a vendor found on the outskirts of Tristram in the original Diablo. He sold random magical items, sometimes very good ones, so players usually made the trip out to visit him and see what he had in stock.

The only problem was, the only way to reach him was by going across a 1-tile wide footbridge. And game technology was a different beast back then. In Diablo, you couldn’t actually walk through other players. You’d walk around them. But if someone was in your way, and there wasn’t an open path to walk around them, you just stood there, stuck.

I remember my brother’s poor friend, who was brand-new to the game, and possibly video games in general. He reluctantly gave me his gold, then he gave me his one, lone possession – something like a battered club, his starting weapon. He nearly cried when I took it, then solemnly informed him that it was not enough.

Ahh, those were the days.